The Potbank Dictionary - here are those strange and special terms, such as saggar makers bottom knocker, wedging, and ginneter that were, at one time, very common in the north Staffordshire Potteries. There's also the special dialect of the district.
https://youtu.be/mADcr0hFFio
View the range of
Potbank Dictionary Mugs here>
This Potbank Dictionary site, with over 10,000 terms, explains and demystifies the peculiar words and phrases collected during a lifetime in potbanks. Some are specific to a particular factory, others are quite common and some are quite technical. Much of the language is dying out as potbanks (pottery factories) are closed, skills are lost and manufacturing methods change.
This is not a particularly academic work but it is factual and in places it's rather quirky! Established in 1976 by Terry Woolliscroft and constantly updated. This site was archived for preservation by the British Library.
The film below gives thay a grate start un sums eat owe up. Thay wonst give eat a goo, duck 😉 An if theyst gorrany werds wattle goo well ear send em t' may wut? 👉 terrywoolliscroft [at] gmail.com
https://youtu.be/N6DJu1Ti5Kg

A place where pottery is made.
It is the entire pottery factory including all the buildings and the yards involved in the potting process, from sliphouse to warehouse. According to the late Robert Copeland: “The term Potbank has been used for generations ... I believe that it derives from the days when Josiah Wedgwood was unable to meet the demand for his creamwares so he sub-contracted to other potters to make his shapes in the body of his specification, and to hold these stocks in their own warehouses for him to call upon as he required them. These warehouses were called banks. The term does not imply that the pottery was on a hillside nor by a canal or river.”  More here>

What are BOTTLE OVENS and KILNS?

Huge and imposing, towering and daunting, brick-built, bottle-shaped structures, up to 70 feet high, essential in the making of pottery. The red-hot heart of the Potteries of Stoke-on-Trent.

In 1939 there were about 2000 bottle ovens and kilns, or, strictly speaking, bottle-shaped structures of various types used for firing pottery ware or its components. They dominated the landscape of the Potteries of Stoke-on-Trent. In 2019 there are fewer than 50 still standing complete with their chimneys. None will be ever be fired again. The Clean Air Act of 1956, and their delicate condition have put paid to that.

At the multi-award-winning Gladstone Pottery Museum, in Longton, Stoke-on-Trent, there are 4 bottle ovens and one bottle kiln. There are also two bottle ovens, next door, at the Roslyn Works. This is the most important and precious group of buildings in the Potteries.

What are bottle ovens and kilns?

Here is a really good and succinct description, of the bottle oven and bottle kiln. Courtesy of  Gladstone Pottery Museum, Longton. (Link to their site > https://www.stokemuseums.org.uk/gpm/
Bottle oven is a generic term applied to a variety of brick-built, coal-fired ovens and kilns used in the north Staffordshire pottery industry. The name derives from the characteristic shape of the hovel or stack utilised by such structures, but covers a range of different types, some of which fired wares to a biscuit or glost state (these were known locally as ovens), with others (specifically referred to as kilns in the Potteries) used in the decorating process (muffle kilns), or the preparation of raw materials for ceramic bodies (calcining kilns) or glazes and colours (frit kilns). There was also variation in the means of construction. For example, not all types had independent hovels, many being enclosed within buildings and having the stack (which equated to the ‘neck’ of the bottle) constructed directly on top of the firing chamber or supported on an outer ‘skeleton’ structure. In addition, by the late 19th century, both up- and down-draught (in which heat was re-circulated around the firing chamber) types were in use within the industry.
Take a look at The Potteries Bottle Oven website here>

What is BONE CHINA?

BONE CHINA A smooth textured and extremely white firing pottery body.  Translucent and very strong. It is unique in that it contains a high proportion of calcined bone ash and biscuit fires at approx 1220 C. A type of porcelain.

Around fifty percent of the body recipe contains calcined cattle bones. Invented at the Spode factory in Stoke-on-Trent around 1800. The recipe contains about 50% calcined cattle bone, 25% china clay and 25% china stone. The bone used at Spode was more specifically the shins and knuckle bones of oxen. (Lower grades of bone china, not from Spode, may have used all or some bones from sheep or goats.  But definitely not horses.)  The bones are calcined at temperatures up to 1000 C before being ground to a fine powder and used in the bone china recipe. Bone china is extremely hard and intensely white. 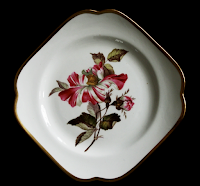 Bone China: a Particularly English Porcelain
The Invention of Bone China:  The Spode company, under Spode I and Spode II, is credited by potters, collectors, researchers and other experts with having perfected the bone china formula before 1800. 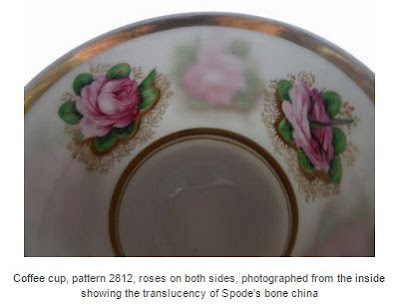