Some of the theories, descriptions and definitions

POTBANK: The entire pottery factory. All the buildings and the yards involved in the entire potting process, from sliphouse to warehouse.


According to Robert Copeland 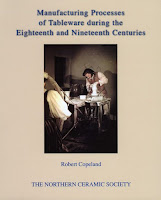 “The term Potbank has been used for generations ...

I believe that it derives from the days when Josiah Wedgwood was unable to meet the demand for his creamwares so he sub-contracted to other potters to make his shapes in the body of his specification, and to hold these stocks in their own warehouses for him to call upon as he required them.

These warehouses were called banks. The term does not imply that the pottery was on a hillside nor by a canal or river.”

According to Mervyn Jones

from Potbank - a social enquiry into Life in the Potteries
Published by Secker & Warburg
1961
"... the potbank. That word is worth a moment's thought. Potters, in referring to their place of work, do not speak of “ the pottery”,which (in the singular) means a ceramic artist's studio. Nor do they speak, as would a stranger, of “ the factory ".

The word - whether for a backstreet workshop with one oven and a score of employees, or for a major establishment famous the world over - is “the potbank". How it was coined. again. I could not discover. I am inclined to trace it to the usage of  " bank" in the sense of a hill, common anywhere in the north and Midlands. Clay, in the distant days when local clay was used, would have been quarried from a hillside and the work done nearby.

Anyhow, "potbank" is the word : a word with a suitably blunt, hard, solid ring. And this place - this region, or city, or agglomeration of towns - this is the Potteries, the only district of England to take its name from its work. Without the potbanks, no Potteries."

According to J B Priestley

1933
J B Priestley was an English author, novelist, playwright, scriptwriter, social commentator, man of letters and broadcaster. In 1933 he made a journey through England. He travelled by train, bus and car, and on foot, talking to the people he met and taking in his surroundings. From the drowsy idyll of rural backwaters to the dark satanic landscapes of industrialized cities, he took a writer's eye and a warmly human sensibility, describing what he found with an insight that holds good today.

He said 'The pottery manufactories - known locally as 'potbanks' - have nothing big about them, no six-storey factories or towering chimneys. You see no huge warehouses, no high public buildings. ....

It resembles no other industrial area I know. I was at once repelled and fascinated by its odd appearance. Perhaps it was all the more curious to me because, being a Yorkshireman, when I see so much grimy evidence of toil, I also expect to see the huge dark boxes of factories and the immensely tall chimneys with which I am so familiar.

...... there were no tall chimneys, no factory buildings frowning above the streets; but only a fantastic collection of narrow-necked jars or bottles peeping above the house-tops on every side, looking as if giant biblical characters, after a search for oil or wine, had popped them there, among the dwarf streets. These, of course, are the pottery kilns and ovens, which are usually tall enough to be easily seen above the rows of cottage houses.

I never got used to their odd appearance, never quite recovered from my first wild impression of them as some monstrous Oriental intrusion upon an English industrial area. But without these great bottles of heat, there would be no Potteries. They represent the very heart and soul of the district, as you very soon learn."


According to C. Shaw (An Old Potter)

from When I was a Child
Published by Methuen & Co, London
1903
" … many of the pot-works sixty years ago were rambling, ramshackle conglomerations of buildings, as if a stampede of old cottages had been arrested in their march.

Some of the 'banks' had very few square yards of open spaces. There were tortuous ways round 'hovels' and under archways, and in some even 'purgatories,' so-called, so that many of the workshops were separated one from one another as if, virtually, they were miles apart. This condition hindered any common rivalry in production, and led to many forms of dissipation and idleness which could never have occurred with larger intercourse.

It also prevented effective inspection by the bailee of the habits of the work people in each shop. Many of these shops were on the ground ﬂoor, and the ﬂoors were often thick with wasted clay, of which little, if any, notice was taken. The shops on a second storey were equally available for methods of killing time without any ﬁxed purpose to waste it."